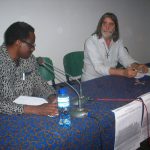 The kidnapping of Pierluigi, Italian SMA priest, began in 2015. In January 16 and 17 of that year, the churches of Zinder, first capital of Niger and then those of Niamey, today’s capital, were burned.
There is a thin red thread that ties the two events. A thread of fire, which is tied with that of the sand. And it is this unimportant and real thread that connects and binds the silent anniversaries of this day. Those were the days of “Charlie Hebdo”; and when the President of the Niger who, with many others, went to the “I am Charlie” march (rally), organized by the then French President François Hollande, in Paris; dozens of places of worship and western symbols were set on fire, and many people lost their lives in the unrest. It was officially a question of ‘avenging’ the offense perpetrated on the faith of the well-known caricature of the prophet of Islam. 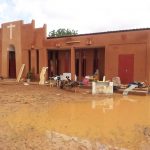 The reactions to the incident were practically nonexistent. The government, apologizing for the failure to protect the buildings of worship, promised to contribute to the reconstruction or repair of churches. As for the civil society, including the most advanced, it limited itself to some weak statements of condemnation and mild solidarity. For ordinary people, part of whom were sincerely saddened by the incident, remained the surprise, but also almost the justification of the destruction, created by the intimidating climate orchestrated by the entrepreneurs of violence and division.
The impunity settled in the city with relative ease and the few hints of compassion from the authorities were of little value. Just at that moment the red thread, a thread of fire woven with sand began to lean towards the other event. Indeed, with that thread the kidnappers tied Pierluigi. A subtle thread that, from the impunity and complicity of the devastated churches, has reached the prayerful hands of the defenseless missionary… In the courtyard of the mission, always kept in order, now there is no longer anyone to receive those who wanted an ear to hear, comfort and an open hand to share the pain. A local lady who takes care of malnourished children said that the departure of father represented the death of the community. She added that she is surprised that God does not act and, in her opinion, limits himself to ‘watching’. Perhaps she has not noticed that from Niamey, passing through Bomoanga, the village of Pierluigi’s kidnapping, there is a thin thread that has not been broken. A thread of fire and sand called hope.
Mauro Armanino, Niamey, 17 January 2020