What Is Simbang Gabi?
Simbang Gabi (which means Midnight Mass) is a Filipino Christmas tradition. It is a series of nine dawn masses on the days leading up to Christmas. It begins on December 16 and ends at midnight on the 24th of December, when a midnight mass is held, known by its popular Spanish name, Misa de Gallo, or “Mass of the Rooster.”

How Did Simbang Gabi Begin?

This tradition was introduced by the Spanish friars to allow the farmers to hear mass before going to the fields early in the morning. The masses can start as early as 4 in the morning.
In the older days, the church bells start ringing as early as three o’ clock, waking people up so they can get ready for the four o’clock dawn mass. The Roman Catholic churches across the nation start to open their doors shortly before the break of dawn to welcome the faithful to the Simbang Gabi mass.

How Is It Practiced Today?
Today, the tradition of Simbang Gabi continues whether you live in the city or in the province, although it is celebrated in new ways. Most churches are decorated with colorful lights and beautiful parol (star-shaped Christmas) lanterns to welcome the churchgoers.
The nativity scene, or Belen, is displayed in preparation for the celebration of the birth of Jesus Christ.

Over the years, Filipinos communities have made some changes in the way that this event is celebrated. Some urban parishes now celebrate mass at evening time. 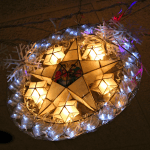 Why Do We Celebrate?
Simbang Gabi is not just a tradition that is celebrated because we need to do so; it is also the spiritual preparation for Christmas and commemorates the birth of Jesus Christ. The celebration is also seen as a way of requesting blessings from the Lord, as most people believe that if one completes the whole series of nine dawn masses, their wishes will be granted.
Simbang Gabi is also recognized by Catholic Filipino communities who are living elsewhere in the world. No matter how or when this celebration takes place, Simbang Gabi provides a strong indication of the depth of Catholicism among the Filipino people. 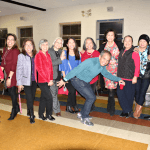 One thought on “Simbang Gabi: A Brief Explanation of the Filipino Christmas Tradition”