SMA has missions in 16 African countries, and local Catholic churches can be found in each of Africa’s 56 nations. Most still need help from outside sources, but how can they become more sustainable, is the big challenge. Father Adam Fernandez of the SMA Indian Province learned something about this during his first 15 years in Africa. His experience shows us that some missions lack the conditions needed to prosper on their own, while others can rise to the challenge. Excerpts from his letter are below.

My name is Fr. Adam Fernandez, SMA, and I belong to the Indian Province. All told, I have spent 15 years in Africa. After 5 years as a student in Tanzania, I was ordained priest in 2002. My first ten years in the priesthood were spent serving missions in two different countries: Zambia and Kenya. After my ordination, I was sent to Solwezi Diocese in Zambia. I was appointed to a place called Zambezi, (close to the border of Angola) – and 250 miles away from the Bishop’s office in Solwezi. The first time I went, the journey seemed interminable. It felt like they were taking me to the end of the world. The fact is that there is no proper road to go to this mission. It was full of rocks and clay soil that reminded me of the black cotton soil I’d seen back in India. To make it worse, it was the rainy season, and we had to cross several rivers that had overflown their banks. It was a very difficult and risky journey. When I finally arrived, I found that the mission had no electricity. That was a new experience for me.

In the beginning the only transport I had was a bicycle, and I could only get to the nearby places. This mission had 35 outstations. Our furthest outstation was 65 miles from the parish where I resided.  Sometimes I had to push the bicycle, because some of the roads were sand. After a few months I was given a used vehicle from the diocese. Unfortunately, this vehicle was not very reliable; it was old and did not have four-wheel drive. It had the alarming habit of breaking down along the way. Sometimes I had to wait a long time for repairs in order to reach the missions. In spite of all the difficulties that I experienced; I was very much motivated by the commitment of the people in the mission. They were very generous in giving of their time and energy for the Church. They were always eager to listen to the Word of God and to participate in the Eucharistic celebration. They put a lot of effort into making the liturgy alive and active. We benefited from many volunteer catechists that involved themselves in teaching catechism to the children and adults, preparing them to receive the sacraments. After two years on the mission in Zambezi, I was sent to Kenya in 2004. This time I was appointed to a parish with fewer outstations, only 15 instead of 35, but the roads to reach these stations were still not good. In the rainy season it was almost impossible to reach our outstations at all. 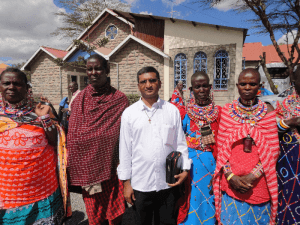 This parish was in Maasai land, in and around a small town called Kitengela. This town is situated about 21 miles away from the capital city, Nairobi. The population of this area was rapidly increasing day by day due to the establishment of small and large factories that formed part of an Exporting Processing Zone (EPZ). People from all over the country were moving to this town to look for jobs. Our parish had a lot of young people, single mothers and children.  There were problems of unemployment and low wages.

Because of the increase in the population in the town, our main parish church became too small. Though we had three masses on Sunday, the church could not accommodate all the faithful. The first challenge that I had in that place was expanding the main parish church. There had been a plan drawn up for enlarging the church before I arrived in the parish and I was in a position to implement the project.

The people had been accustomed to getting help from outside because of the missionaries that had served the parish in the past. Nevertheless, I believed that they themselves could contribute to support this project. The church leaders, together with myself, motivated the Faithful, and slowly they contributed. We had to organize several fundraising events, and we carried out the project in three phases.

Thankfully, the people in this parish were very active and committed. They were quite generous with contributing their energy and time for the church. On Sundays, they spent the whole day in church activities. They came in the morning for mass, and in the afternoon, they went to the small Christian communities. Many young people spent a lot of time preparing for the liturgy and participated in it actively. Accommodating all the children who needed schooling in the area was challenging due to a lack of enough public schools. There were a few private schools, but they were too expensive for most parents. A lack of money meant they could not send their children to private schools, and a lack of space meant they couldn’t go to public schools either. 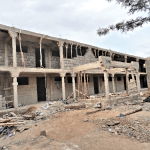 Our Parish had an elementary school on the church premises, and local parents preferred it because of the good education and discipline that their children got with us. The school fees were reasonable and affordable for many parents. However, this school did not have a proper structure, or the facilities needed to meet the growing demand. This time we looked for support from outside our community and encouraged the local people to contribute towards the school project. In a period of ten months, we were able to construct a better school. Today many poor children are benefiting from education in our parochial school.

All our outstations are in Maasai land. They are semi-nomadic people who survive by herding cattle. They have their own challenges. The children have to walk very far to go to school. They do not have proper drinking water, and their area often experiences drought. During the dry season the people have to travel for a long distance with their cattle to get water. They used to come to church very late on Sundays, because they first had to go and look for water. In the main station the people wait for the priest, but in the outstations, it is the priest who goes and waits for the people. The people here experience a hard life. 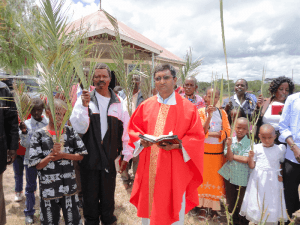 As an SMA missionary priest, I give priority to pastoral work, but at the same time I have had to open my eyes and ears to the needs of the people around me. I focus a lot of my effort on education for the children. I believe that only education can eradicate poverty. I try to convey the importance of attaining self-sufficiency in the parish, by encouraging people to be generous in their contributions. I appreciate the people of Kitengela for their spiritual and material support that I received during my stay of almost eight years. Today I am also happy to hear that the people in the parish, together with their pastors, continue to grow with the spirit of development.