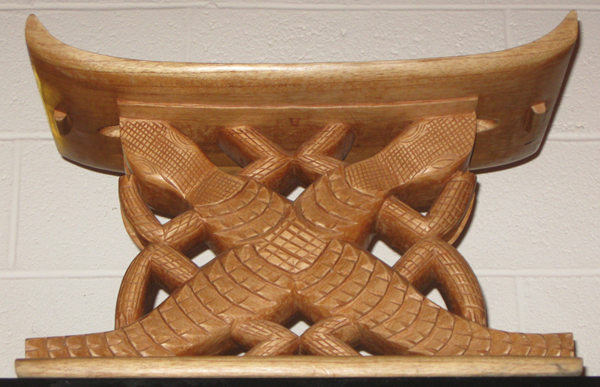 In his book Religion and Art in Ashanti, R.S. Rattray describes the word Adinkra (also called Adinkara) as deriving from the so-named King of Gyaman—now present-day Cote D’ Ivoire—who angered Ashanti King Bonsu-Panyin by copying that tribe’s Golden Stool. Bonsu-Panyin defeated and slew Adinkara in the early 19th century. ADINKRA SYMBOLS are indigenous to both the Akan of Ghana and the Gyaman of neighboring Cote d’Ivoire.
Originally designed to pattern funerary cloth, ADINKRA has become ubiquitous in Ghanaian culture, from everyday clothing (see the three batik T-shirts) and jewelry to decorations for buildings and monuments. Of the hundreds of ADINKRA SYMBOLS that now exist, GYE NYAME—meaning “God alone”—predominates. Indeed, it is likely the plastic chair you are sitting in at the local Ghanaian “spot” (bar) is decorated with a GYE NYAME symbol.
ADINKRA SYMBOLS are often symmetrical, their abstract simplicity giving them a timeless quality. Often they are based on parables, though sometimes they are merely decorative. In a country besieged by Western influence, ADINKRA SYMBOLS continue to thrive. Though their “purity” is debatable—as in the “BARAK OBAMA 2009” I saw referred to as an ADINKRA SYMBOL in a magazine recently—and the evidence that they originate from the Moslem north is strong, ADINKRA SYMBOLS are an art form Ghana has made its own. Their closest modern-day parallel is the characters in Chinese writing.
Courtesy of Kabuki Creations of Accra, from left to right these T-shirts display symbols meaning “Hope,” “God alone” (the GYE NYAME symbol echoed by the framed string art to the right center and elsewhere in this exhibition), and “Strength of Mind, Body and Soul” (as symbolized by a ram’s horns). Flanking a pair of royal chairs atop the cases, an ADINKRA stool depicts a two-headed crocodile with a common stomach, symbol of “Unity With Diversity.”
The three cloths are loaded with ADINKRA SYMBOLS. For example, the cloth on the left contains the symbol for “The Back of Gyawu’s Head” (a royal hairdo that is repeated in the bark cloth in the middle), “Sacrifice” (a cross that is repeated in all three cloths), “The Teeth and The Tongue” (two connected ovoids, each with three “buds” extending from their sides, symbol of communication), “Aya” (the fern, symbol of hardiness), and “Crossed Divisions” (symbol of precision). Note also the symbols on the bark cloth (middle), with the stool symbolizing royalty and another version of the ram’s horns symbol.
All definitions courtesy of W. Bruce Willis’s The Adinkra Dictionary.