Dr. Nicholas Bridger, curator of Africanizing Christian Art, the new exhibition at the SMA African Art Museum, has spent years researching, writing, talking, persuading and threatening people on three continents to bring the project to completion. His subject is The Ekiti Scheme, the brainchild of Fr. Pat Kelly, Provincial of the Irish Province of SMA, and two of his priests, Fr. Sean O’Mahoney and Fr. Kevin Carroll.

One of three Kings (Magi) by Areogun of Ossi Ilorin in the collections of the SMA African Art Museum, Tenafly, NJ.

The purpose of the Ekiti Scheme, 1947-1954, was to inculturate Christianity into the arts of the Yoruba people of Nigeria. Put in the simplest of terms, this meant showing Jesus Christ, the Virgin Mary, and the angels with black or brown instead of white faces, and wearing African costumes in African settings. It may be surprising to learn that this was controversial, but it was. The Ekiti Workshop closed in 1954, but Carroll and O’Mahoney continued their work among the Yoruba for decades thereafter. Over one hundred works of art dating from 1947 to the 1980s, have been gathered for this groundbreaking exhibition. Rare and beautiful pieces have been lent by the Irish Province of SMA, The SMA African Art Museum, The Smithsonian Institution and the Vatican. Bridger has brought to light some mysteries that remain unsolved. Where is the third Magus (wise man) in the set of three constituting the last work of the great Yoruba carver Aerogun of Osorio? One is in the collection of the SMA African Art Museum, Tenafly, the Gift of Fr. Sean O’Mahoney, who bought it from Areogun in Africa in 1952. The second, in the collection of the Kevin Carroll Archives in Dromantine, was pained black – or, more precisely, chocolate brown, when it was at an SMA house in Ibadan, Nigeria. The third is missing.

One of the featured Yoruba carvers in the exhibition is Bandele of Osi Ilorin ( a small village near Ekiti). George Bandele Areogun was the son of Areogun, one of the greatest master carvers of the region of Ekiti. Bandele, who gave up his traditional Yoruba religion for Christianity, was one of Fr. Carroll’s favorite carvers. Carroll was prescient in recognizing Yoruba artists as individuals, not generic folk artists. His protégés, such as Bandele and Lamidi Fakeye are now widely recognized as authentic, idiosyncratic masters of their art. Several of Bandele’s most important works have been brought together for the Tenafly exhibition. 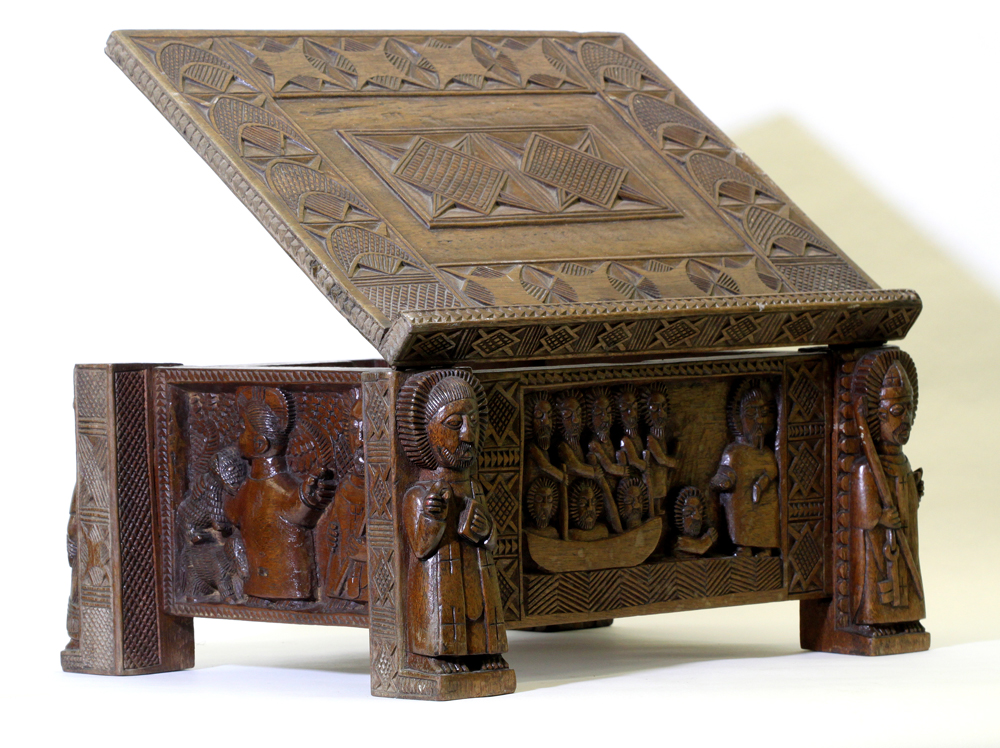 Missal Stand, George Bandele of Osi Ilorin. The four carved panels are the Annunciation, The Storm on the Sea at Galilee with Jesus walking on the water, the Good Shepherd, and St. Peter receiving the keys to the kingdom from Christ. These four doors have been in the Tenafly museum’s collections since the opening of the SMA African Art Museum in 1965. They have been relocated to a prominent position in the museum rotunda, restored to their original condition and illuminated by state-of-the art track lighting. 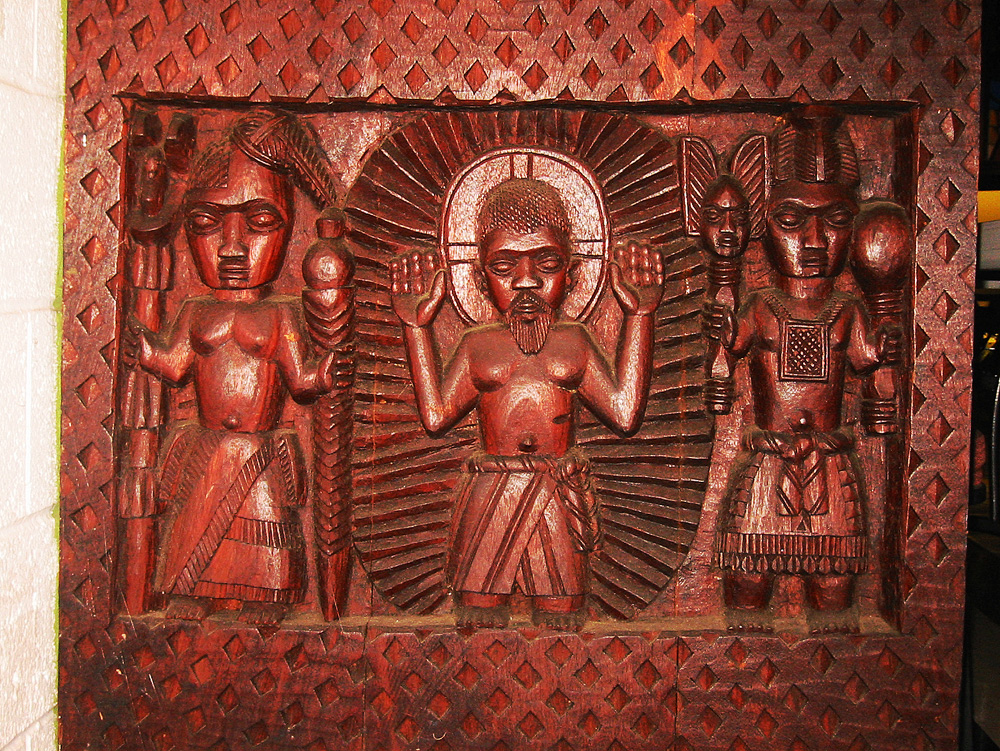 The Transfiguration, panel from one of four doors by Bandele of Ossi Ilorin (George Bandele Areogun) in the collections of the SMA African Art Museum, Tenafly, NJ

Bottom panel from Door C: Christ with a Priest of Shango on his right and a Priest of Osanyin on his left. The Transfiguration by Lamidi Fakeye, lent by Drs. Nicholas Bridger and Susan Yoes Bridger. The Yoruba artists associated with the Ekiti Scheme created pagan as well as Christian works. Great festivals, involving whole villages or groups of villages, are held throughout northern and southern Equity towns. The Yoruba Epa Festival is the celebration of social roles upon which the life of a Yoruba community depends. An Epa mask is a large and elaborate wooden sculpture carved from one piece of aberinberini wood. The mask proper is a face in the form of a round, pot-shaped helmet with wide open protruding eyes and a gaping mouth through which the wearer sees. The elaborate superstructure communicates the identity and meaning of the mask. It may be a mounted warrior, an Oba or king, surrounded by his attendants (see illustration below); a woman, symbol of fertility; or a leopard attacking an antelope (Oloko: Lord of the Fields). 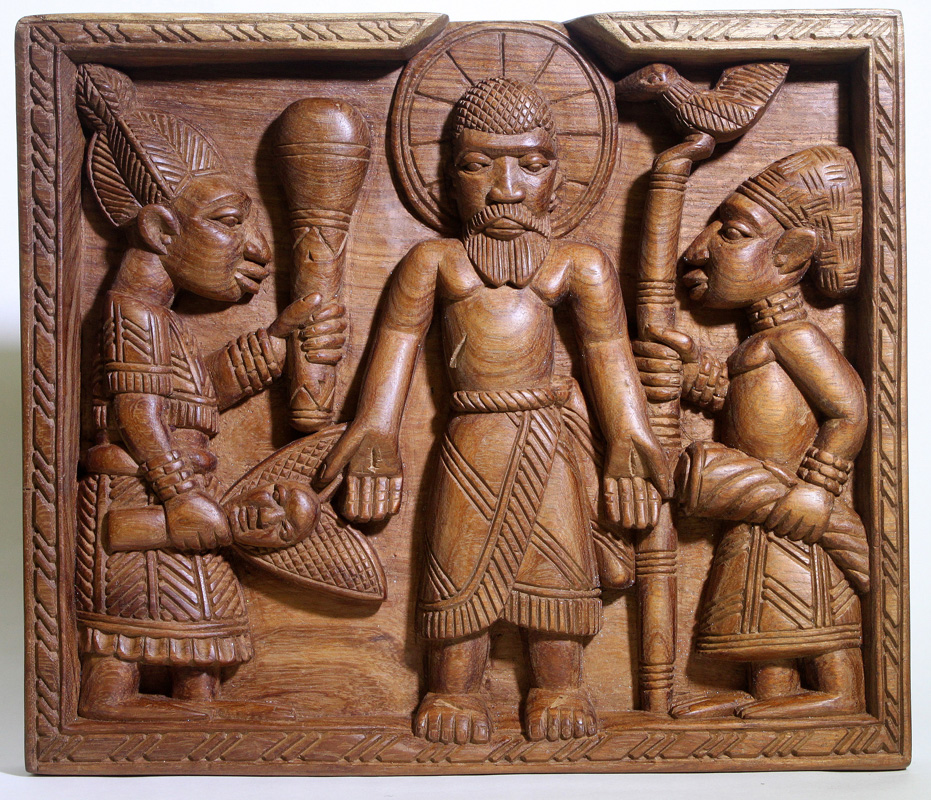 The dancer’s body is barely covered with palm fronds or cloth. 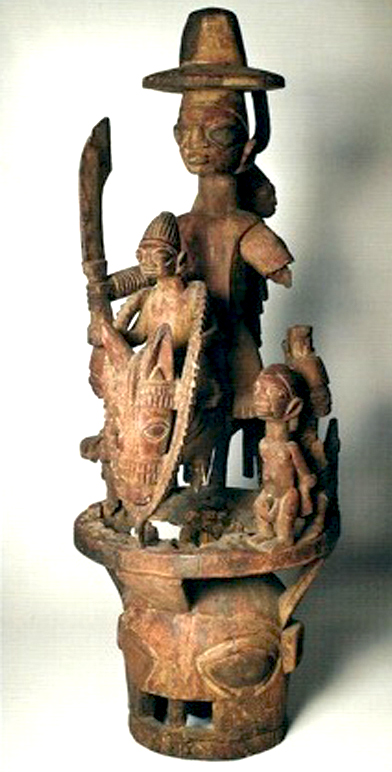 Epa Mask, Areogun of Ossi Ilorin, from the collection of Dr. Marshall W. and Caroline Mount.

The Epa mask may be four feet tall and weigh seventy five or eighty pounds. It is not only supported by its wearer; it is vigorously danced. Epa Mask by Areogun, Lent by Dr. Marshall W. and Caroline Mount.